I had always wanted a tattoo and put it off until I was 35 years old, so I was totally sure it was the right thing for me. Unlike many people I had reached my decision after a lot of thought and deliberation. It wasn’t a rash, youthful choice under the influence of alcohol or pressure from friends and the choice of design, a bumble bee, involved no names that could be regretted later or that would necessitate removal at some future time.

Totally happy with the end result I have never regretted the decision at any point subsequently. However, the passage of nearly 20 years has meant an inevitable blurring of the design and endless questions like ‘what exactly IS your tattoo?’ or ‘ is it a bird or butterfly?’. I decided to get it removed, or at least faded enough to have it re-done and this is the story so far. 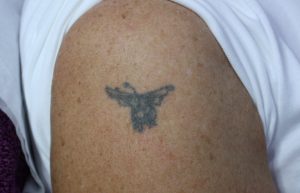 I was nervous before the first Tattoo Removal Treatment, not knowing what to expect or how painful it would be. Sue Jenkins, Manager at Body Matters and Laser Specialist, was really reassuring and after a bit of paperwork she answered all my questions and put me at ease. The Laser would be passed over the tattoo quite quickly and would make a loud ‘cracking’ sound. The ink in the Tattoo that was trapped between the cells in my skin would be fragmented and then absorbed and dispersed by the natural immune defenses in my body. I was told that there may be some bleeding but that this would not be excessive and would stop within an hour or so.

I was ready to start. 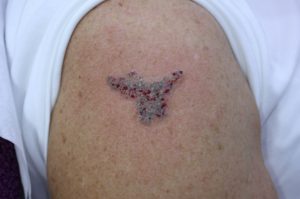 Surprisingly it was more than bearable. The ‘cracking’ sound was quite loud but it was not too painful, a bit like being pricked lightly with a fine needle. Sue stopped every now and then to check if I was alright and the whole treatment was completed in less that 10 minutes. The area felt a little warm and there was a bit of bleeding, but I reflected that I had had nothing to be concerned about and after an application of some Vaseline and a gauze dressing, we were finished. 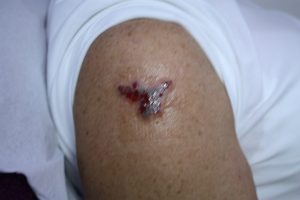 An hour later it looked a lot worse than it felt. It had stopped bleeding but was a tiny bit swollen. Strangely though it was not sore at all. I was told to keep applying Vaseline so that any crusts that were formed were not prematurely scuffed off and was given lots of aftercare advice, most of which was common sense. I was told to make another appointment for 4 weeks time. 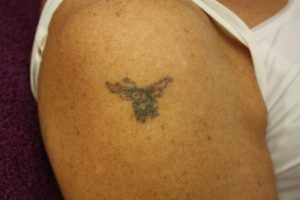 One week after the first Tattoo Removal Treatment I had no irritation or discomfort. I had continued to apply Vaseline and could already see the Tattoo had started to fade. 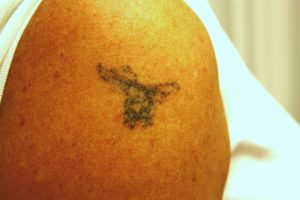 Another week later the crusts had almost gone and a lot of the Tattoo had gone to! I was really looking forward to my next treatment. 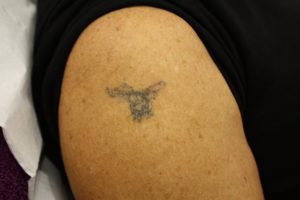 Before my 2nd Tattoo Removal Treatment I was much less nervous. The same procedure was followed and in about 10 minutes the treatment was finished and I left having made another appointment for 4 weeks time. 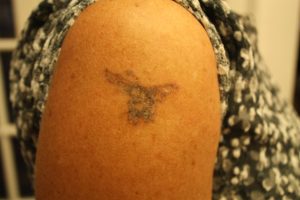 I followed the aftercare advice as before and after a week the fading was remarkable. 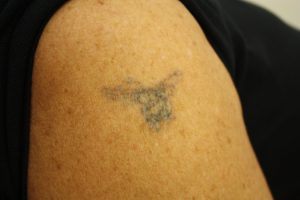 Before my 3rd treatment I compared my Tattoo to the first picture taken, pre-treatment. I was so pleased with the results so far. 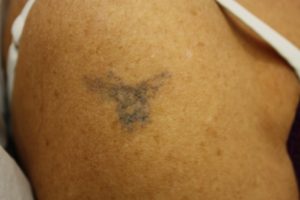 Just about to have my 4th session and then a 2 month break before continuing.

I will update this post after my next session, but so far it’s been much more successful than I had hoped. You can see for yourself how much the Tattoo has faded in just 3 treatments. Now I just have to decide what to do next. Shall I remove it completely or get it re-done?

I will update the story in a couple of weeks.

This website uses cookies to improve your experience while you navigate through the website. Out of these, the cookies that are categorized as necessary are stored on your browser as they are essential for the working of basic functionalities of the website. We also use third-party cookies that help us analyze and understand how you use this website. These cookies will be stored in your browser only with your consent. You also have the option to opt-out of these cookies. But opting out of some of these cookies may affect your browsing experience.
Necessary Always Enabled
Necessary cookies are absolutely essential for the website to function properly. This category only includes cookies that ensures basic functionalities and security features of the website. These cookies do not store any personal information.
Non-necessary
Any cookies that may not be particularly necessary for the website to function and is used specifically to collect user personal data via analytics, ads, other embedded contents are termed as non-necessary cookies. It is mandatory to procure user consent prior to running these cookies on your website.
SAVE & ACCEPT